Made for the Extra Credits Game jam #4 - Connect.

Your job is to defend from the enemy, gather resources, and then attack.

Oh gosh! That was a tough fight! I finally beat them! This is a really fun strategy game. This was my final push before victory!

The trick was to expand in a diagonal direction with cheaper turrets, while balancing reinforcements with walls and upgrading your income! This keeps the enemies away from your "farms" while also letting your innacurate LVL 1 turrets have all the enemies spread out to be hit! Try to get 2nd level turrets ASAP. Then finally you can build up an army to finally push back against the defenders and give yourself a proper chance at winning! Then it's just maintaining your towers until victory!

You got it totally right, that's the best strategy! I'm really glad that you figured it out and liked the game!

I really did! And that's awesome realizing I found the best strategy recommended by the creator!

So, I was smashed quite a few times in a row without me seeing any real progress. In the end I managed with an approach I had rejected as short sighted, but due to the enemies coming in quickly and hard it seems it's the only way to go.

Overall it was frustrating at first but great to finally beat it. I might have missed that completely, so you could add for example a beginner's difficulty so people don't just fail again and again and eventually quit.

I like how not only nodes but also connections can take damage, so you get rewarded for building many connections! And nice to see some other node based game. ;)

Thanks for the suggestion! This was meant to be a really short and simple game, but if I wanted to expand it, I'd totally add a difficulty option, or more levels with different difficulties.

I'm glad you beat the game and liked it! 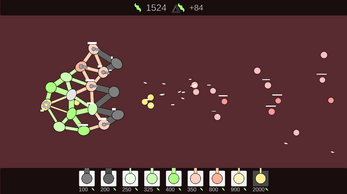